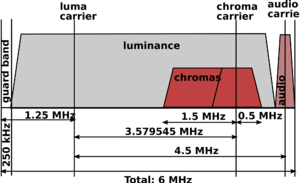 Luma: Amplitude Modulation. The amplitude denotes the brightness on each scan line.

Chroma: Used an analog QAMQuadrature Amplitude Modulation system, where the amplitude denoted the saturation of color, and the phase denoted the hue. This uses the IQQuadrature signals form the basis of complex RF signal modulation and demodulation, both in hardware and in software, as well as in complex signal analysis. (YIQ) color system.

An example of how the signal looks to a RFRadio Frequency receiver, assuming IF bandwidth > 6 MHzMegaHertz (MHz) 10^6 Hz: